Video of the portraits in the atrium. 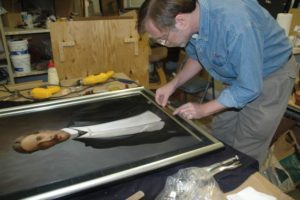 All portraits in the image above were painted by David Wells Roth between 2007-2010 and were commissioned by the the United States Federal Court in Puerto Rico.  The commission included 33 portraits, which now hang in the atrium of main courthouse in Hato Rey, San Juan.  The last five portraits were completed in March of 2010 and were on temporary exhibit in the Whistler House Museum from April 28th - June 16th, 2010.  A 34th portrait was commissioned in 2015.

For a comprehensive collection of all of David Wells Roth's judicial portraits: judicialportraits.com .

View photos from the development of the portrait series

Press on the project:
Framingham artist completes series of judge portraits
An article from the San Juan Star

History of the portraits of United States district court of Puerto Rico.

Over time, the courthouse in old San Juan was expanded beyond the walls of the nineteenth century building it occupied through the first half of the 20th century.  In 1974, a large modern structure was erected in Hato Rey, the business district of San Juan, where the majority of federal cases are heard today.  This courthouse was named after the thirteenth Judge to be appointed - the first Judge native to Puerto Rico - Judge Clemente Ruiz-Nazario.  Since then, all the Judges appointed in the district court have been natives of Puerto Rico.

As is generally the tradition in the US court system, portraits are commissioned to preserve and document the legacy and historical presence of the sitting Judges. For reasons unknown, this tradition was not followed in Puerto Rico.  Observing the void in the preservation of a visual judicial history, Chief Judge José Antonio Fusté, the presiding Chief Judge in 2007, conceived the idea of commissioning the series of portraits to paint the portraits of all 31 judges (at that time) in the court’s history.  Now it is 34.

Because there were no readily available visual references from which to paint the portraits of the earliest judges, court librarian Ana Milagros Rodríguez conducted extensive research, diving deep into the layers of forgotten history to try to find images of the early judges.  There were many dead-ends along the way.  After nearly four years and countless correspondences with universities, institutions, libraries, and relatives of those Judges, libraries from Maine to New Mexico including Puerto Rico, Ms. Rodríguez was finally able to find images that could serve as a suitable reference for those portraits.